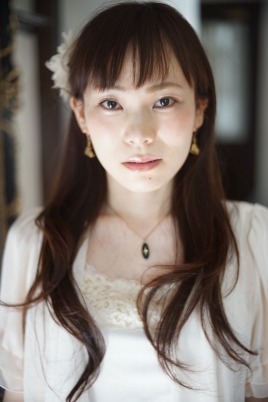 Born in Nagoya Japan,
Having natural hearing loss only left ear but right ear has absolute hearing by nature.
Started writing and singing own songs at the age of 7, without any musical education.
But grew up with listening Beethoven and anime songs, that is because her music
is based on classical music and anime songs.

As a singer, sang many TV commercial songs and game songs,
for example, Japanese most famous wedding magazine”Zexy’(TV commercial)

Since 2009, started writing songs for Japanese famous artists; as Nana MIZUKI, and
idol groups; as MomoiroClover Z.
Wrote over 100 songs ever, made the hit charts and won a prize many times.
Now, she is the one of the most successful young female composer in Japan.
Especially good at making melodic Anime songs, Game songs and idol pop songs.

Now preparing for moving to N.Y. as an artist around Sep. 2016.
On the other hand, new project “Iroha-Chigiri” that is a band consisted by only girls with
Japanese traditional music is going in Japan.

Co-write
2010 Co-write with Yoko KANNO; composer of Macros Frontier, GHOST IN THE SHELL
2015 Co-write and performed together with Kohei Tanaka; composer of ‘ONE PIECE’

Calligraphy
Learned from mother who is Calligraphy instructor and got a black belt at the age of 11.